After our tour in Swapokmund we drove to the next point on the roadmap: Uis, a very small place located perfectly to our next points of interests. To not get hangry (hungry -> angry) again we also made ourselves some avocado sandwiches.

On the way we also saw a lot of little huts along the road, like little shops selling gem stones. because of previous experiences we decided to not investigate them further.

Uis is quite a bit bigger than Solitaire, meaning it is not just a highway petrol station with a camp. All places on the campsite had a straw house for shade, a private shower, toilette and dish washing area, similar to the campsite in Swakopmund. Also there was a pool and a fireplace. Even though it was quite a cold evening already we went for the pool and afterwards we got some free firewood from the owner of the place, to make a little campfire.

For dinner we planned to make chicken with potato dumplings, and since we already had the fire we moved our dinner table next to it.

Next day we started the drive to the Damara Living Museum. The Damara are one of the native tribes of the area (likely the biggest but I am not 100% sure). On the way there we again saw lots of little "shops" with gemstones. This time there where some people at each of them, trying to wave us to their place. Later on we learned that most of these people are from the Himba tribe.

The museum had a nice parking place and we had to pay an entrance fee for a "Tour of the museum including bush walk". A guy called Thyron was our guide. He also introduced himself in Damara language, but I cant remember nor spell it in letters. One of the main features of the Damara language is the use of 4 different types of "clicks" (sounds made with the tongue) that are part of many words. When trying to replicate these words all of us failed on getting timing of the clicks right. Still Thyron and the others were passionate about repeating words to us, and I think we can now all say How are you? (Madisa) and Thank you (Aius or Kay Aius for Thank you very much)

In the different huts we where shown different traditions and workflows of the old Damara people. We saw a blacksmith creating tools, different plants used as medicine, traditional beer and how different kinds of jewellery where made from ostrich egg shells and melon seeds.

Afterwards Thyron lead us to the trees behind the little village to show us the bush walk. We got some explanation for different plants, especially the Mupani Tree. This tree is used for brushing teeth, treating diarrhea by chewing on the leaves, makes the best firewood and has likely even more uses that I forgot about. It is also one of the most common trees in the Namibian desert and it has leaves shaped like a butterfly. All the plants where explained to us by a lady in Damara language and translated into English by Thyron afterwards. Finally we got a hunting demonstration and saw one of the traps the Damara used to build when hunting was still allowed in Namibia.

As a last part we got a quick presentation how fire is made without matches and a traditional dance show from the entire village. Lukas and Thyron also traded knifes, an Opinel vs one of Thyrons handmade knifes. Then we all checked the shop and I got myself a traditional razor / multi-tool. (You can see the knife and the razor further up in the images from the blacksmith's hut)

The next stop for day 8 was the stone engravings of Twyfel Fontein, one of the oldest places in Africa known for these kinds of traces. Twyfel Fontein in dutch means "doubtful fountain" and comes as the place is located next to a fountain that sometimes has water and sometimes does not. These engravings have been made by people of the bushman tribe thousands of years ago. They show what kind of animals where in the area, locations and conditions of waterholes, shamanic rituals and states of trance and other interesting details. The area is a protected world heritage site and can only be explored with an official guide. The tour takes about 45 to 60 minutes.

During that time we also saw a lot of animals like lizards and different birds.

Finally we took some time to checkout the national park center building, with lots of information on the place, its history, nature and drawings.

To end the day we drove to a campsite in the area (Khorixas). It was located near a gas stop with loud music, but inside the fences of the camp there was even a springbok running around, not one of the best nights but quite OK. In the evening we also had a few cups of tea with the security guards around our campfire, that also helped us out with some more firewood and told us some stories from their lives and families 🔥. 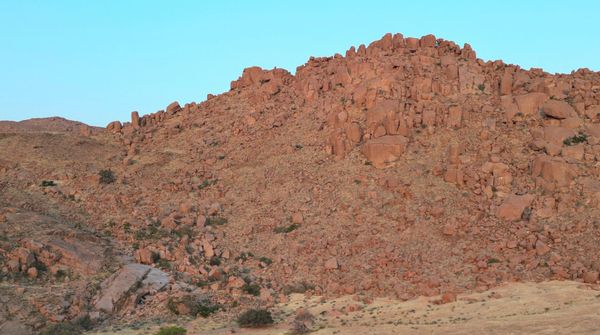 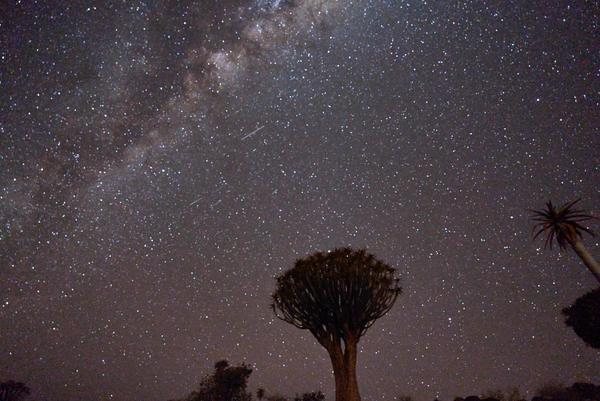